Roz and Rocco’s is a restaurant owned and operated by Christine (Nigro) and Scott Brayton and named after their fathers, Roz Brayton and Rocco Nigro, who died in 2007 and 2014, respectively. Set in a thoughtfully designed space, the style of the Brayton’s “all-American” family is interwoven with the food and recipes of Christine’s two Italian-American grandmothers, creating a fun, casual, and comfortable environment.

Our warm and gracious service mirrors the hospitality delivered by an iconic Italian Grandmother to those dining at her kitchen table, making Roz and Rocco’s perfect for both frequent dining and special occasions. 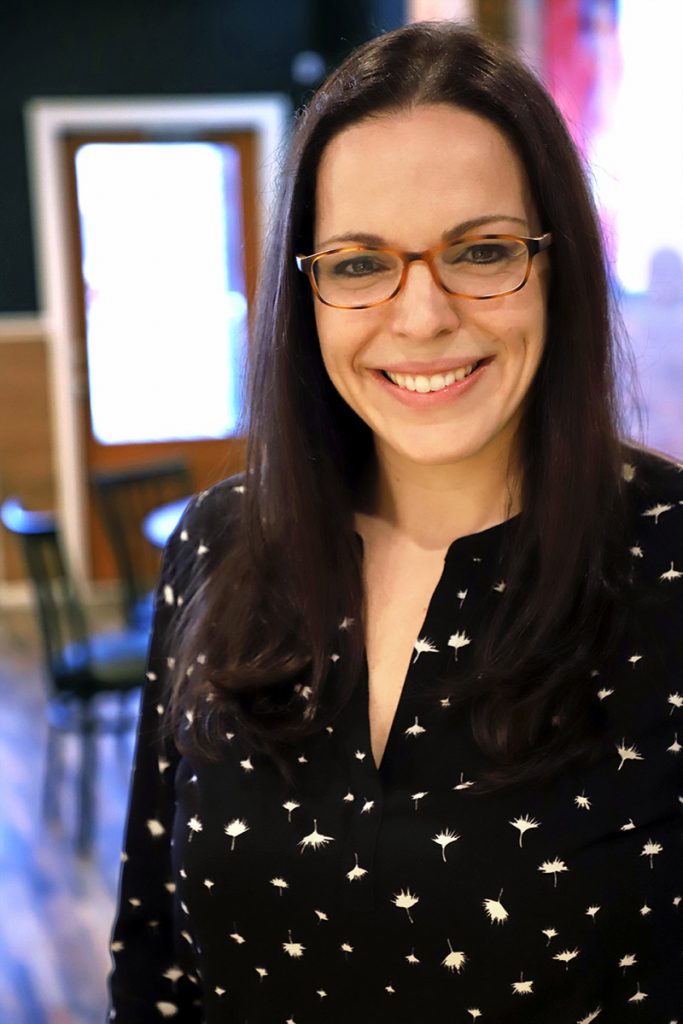 Beginning her hospitality career at the tender age of 16 as a busser at the Four Seasons Hotel in Philadelphia, Christine went on to work at some of the most renowned restaurants in New York – from the gargantuan halls of Tao to the glistening sushi of Atlantic Grill, the elegant Italian of La Pecora Bianca, and the majestic seafood towers at the Meatpacking District’s celebrity haunt, Catch.

Born and raised in Broomall (and a proud Marple Newtown Tiger), she attended Cornell University where she studied hospitality management – a program that included a working stint at the opening of the Borgata Hotel Casino and Spa in Atlantic City. After graduation, Christine began working at Morimoto in Philadelphia followed by a multi-year stint at the Four Seasons Aviara in Carlsbad. The urge to go to New York brought her to Tao and, later, to BR Guest’s Blue Fin restaurant in Times Square. The trifecta of Atlantic Grill, La Pecora Bianca, and Catch rounded out her time before Casa Nela, where she consulted as a Founding Operating Partner of Hospitality Firm – a company owned and operated by New York City restaurant legend Steve Hanson and his partner Alexandre Gaudelet.

As the pandemic struck New York City, shutting down restaurants and changing the dining landscape forever, Christine yearned to expand her family and return to her roots in Broomall. She now lives in Wallingford with her husband and business partner, Scott, and their two daughters, Scotlyn and Hollyn. She hopes to incorporate decades of experience as a restaurant manager and director in both the down-home, local realm and at the corporate, national level with her love of family, food, and her beloved father Rocco in order to give the community a unique experience at Roz and Rocco’s – one that is reminiscent of her time at her grandmothers’ kitchen tables.

Throughout his life, Scott has held every position in a restaurant – both back of house and front of house. He was born and raised in Louisville, Kentucky (where most of his family still resides). It was in nearby St. Matthews that he found his first job at age 13 bussing tables at WW Cousins. He spent both his high school and college years working as a cook, server, and bartender around Louisville and New Orleans where he attended Tulane University.

With the entrepreneurial spirit in his heart, he went on to create his own LLC in order to sell life insurance through Northwestern Mutual. While the business-ownership elements of the job were rewarding as was working for himself, Scott decided in 2013 to make his dream of one day owning a restaurant come true. He began by attending culinary school in New York City and jumped in feet first. He graduated with highest honors from the Institute of Culinary Education, also taking home The Leadership Award for his class. While in school, he worked with the head chef of BLT Steak, learning how to operate as both a line cook and an expediter. He also took a job as a host and a server at BR Guest’s Atlantic Grill (where he met Christine), and quickly moved up to a management position at BR Guest, starting at Ocean Grill.

Not wanting to let any opportunity for growth and learning pass him by, coupled with his passion for wine, Scott became a Level One Sommelier in 2015. With this certification, he moved around BR Guest, holding several different management positions that often focused on fixing the beverage cost and crystalizing systems. This skill set him apart from his peers, and he was designated as the Brand Beverage Manager for the ‘Seafood’ brands within BR Guest (Atlantic Grill, Ocean Grill, Blue Water Grill, Blue Fin, and Isabella’s), serving as a mentor and trainer for all beverage managers as well as a standout floor operator. Given his talents, he was selected to run the beverage program at the re-opening of Blue Fin in Times Square in 2015.

After a successful launch, he decided it was time for a change and joined the opening team of Avra Madison. He initially set up the beverage program there while making his mark as a leader among the management team in general operations and on the floor. Avra immediately presented as a smash hit in New York City, and Scott was quickly promoted to Assistant General Manager and, later, General Manager. At the time, he oversaw nine other managers and over 150 front-of-house line staff.

After his nearly ten years in the hospitality industry and with the partnership and support of ‘his girls’ (Christine, Scotlyn, and Hollyn), Scott has succeeded in making his dream of owning a restaurant come true! 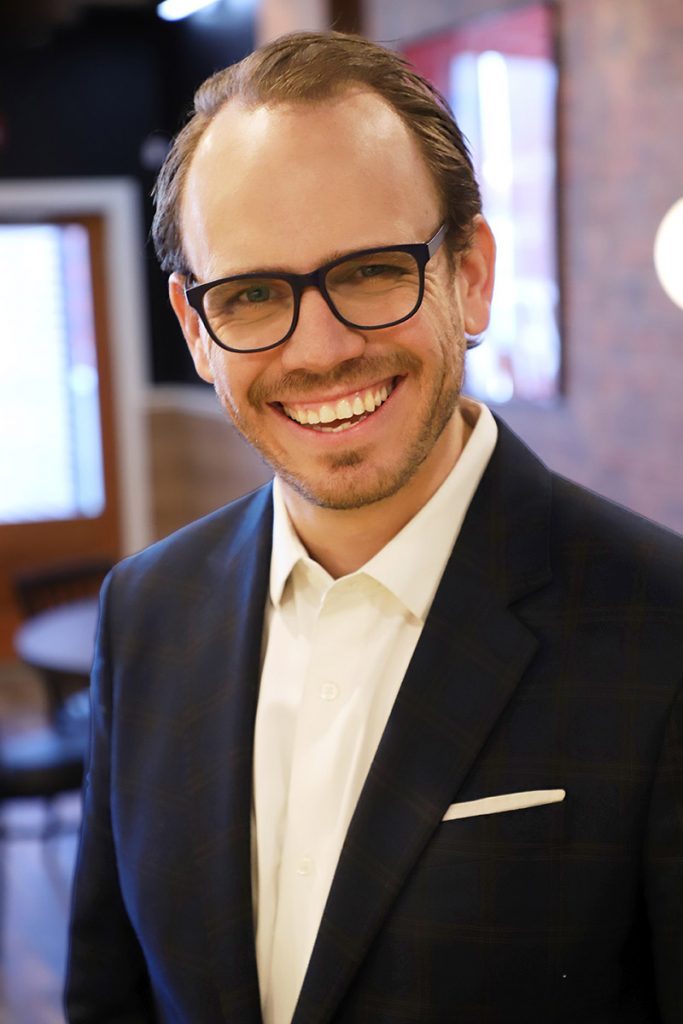 WHO ARE ROZ AND ROCCO?

Roz and Rocco are the owners’ fathers.

Scott’s father, Roswell “Roz” Brayton Jr., followed in his father’s footsteps as President of Woolrich Clothing Company when Roz Sr. retired in 1996. Under their helm, this successful family business went on to span seven generations of the Brayton family. Founded in 1840, Woolrich’s wool mills made the fabric for their products, including their signature “buffalo plaid” pattern. They succeeded in creating a globally recognized brand with a reputation for quality and excellence that has stood the test of time.

Christine’s father, Rocco M. Nigro, shared his first name with his father, Rocco F. Nigro. Christine’s grandfather opened his own custom upholstery business in 1951, which furnished and beautified homes in the Italian neighborhood of South Philadelphia (and beyond) until 1991. It was there that her father learned not only how to craft furniture, but also the importance of both managing and inspiring others. The fusion of these skills led to Rocco’s financial success in the many businesses he opened after graduating from law school.

Roz and Rocco both passed on a knack for business and an entrepreneurial spirit to their children, Scott and Christine. This gift has encouraged the couple to apply their decades of operational know-how and passion for hospitality towards opening their own restaurant in memory of their fathers, hence the name “Roz and Rocco’s.” 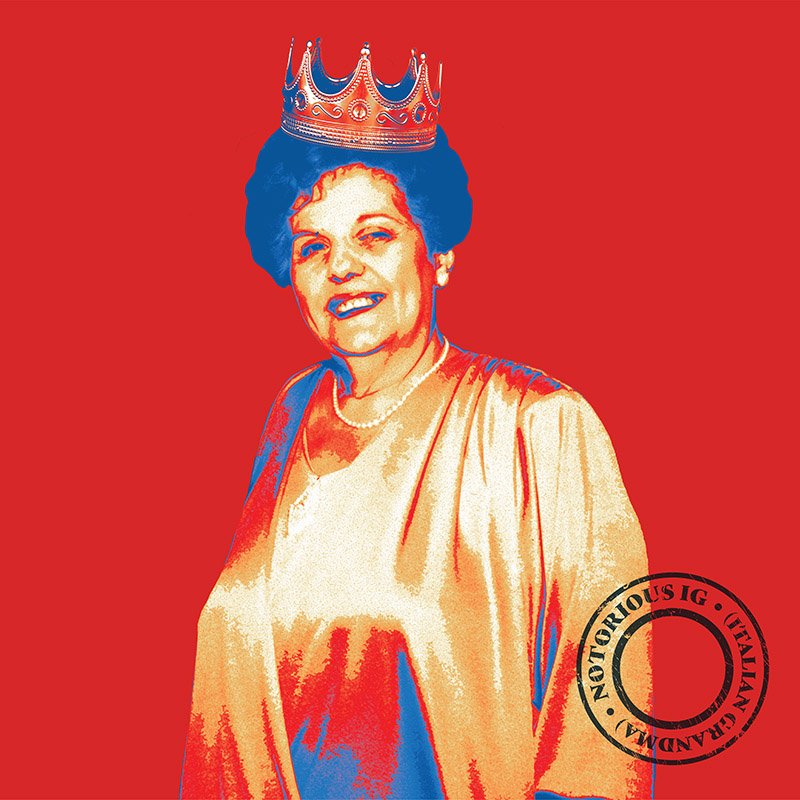 While Scott’s and Christine’s fathers inspired their entrepreneurial ambitions, the female figures in their lives defined the meaning of hospitality for them. Christine’s two grandmothers, Edith and Hilda, were particularly influential. Both personified the iconic “Italian Grandmother” (IG). Everything an Italian Grandmother offers is ample, approachable, addictive, and affordable.

An IG is never skimpy with her offerings! She always has a variety of home-cooked treats to share, so plates are piled high on her table. The options are plentiful and limited only by her guests’ desires. In honor of the IG, our menu offers sizeable portions that are meant to be shared in hope that each guest can taste as much as possible.

It is also important to note that ‘ample’ does not necessarily mean gluttonous. Christine’s mother Mary Louise – now an IG herself – eats a 2022 diet of lean proteins, lots of vegetables, and healthy fats. However, when hosting an event, her offerings are still ample, providing tons of choices and plenty to go around. Check out our healthy options here. 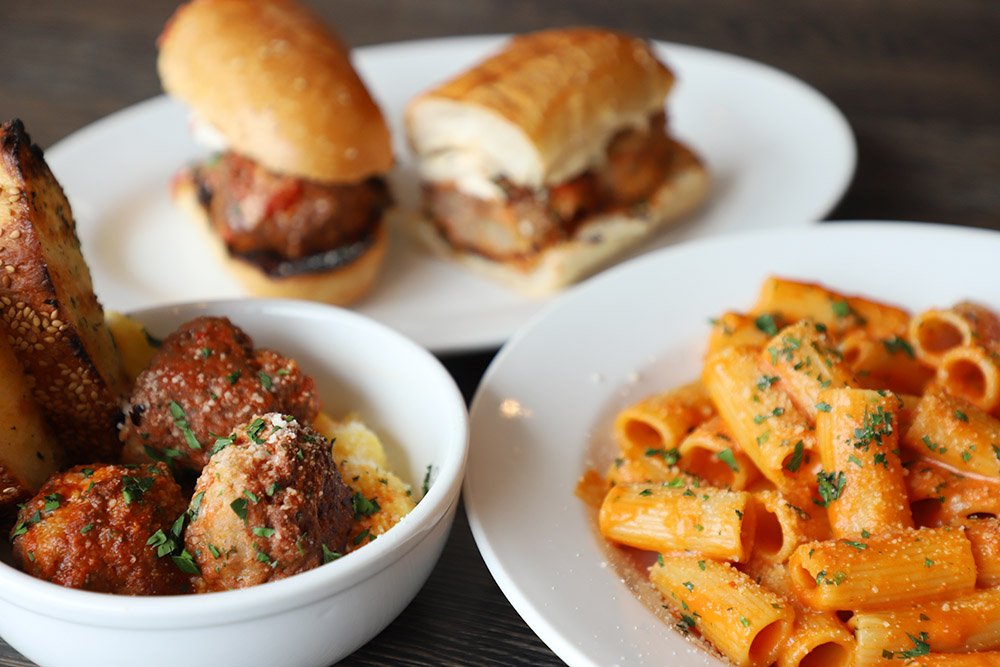 An IG gives her guests what they want, never pushing them to eat what she wants to cook. And once an IG knows a guest’s favorite food, she intentionally prepares it for them.

Roz and Rocco’s offers items that, by and large, most people like. Our intention is not to ‘educate’ our diners or provide overly fussy foods that require the use of a dictionary to place an order. Menu items are pronounceable, familiar, and described by words that are easily understood by all.

Although an IG’s food is always approachable, it is equally unforgettable! Every dish is created with care and infused with love, which leaves you craving more. Everyone remembers Grandma Hilda’s long-marinated roasted peppers being on the table; the same can be said for Grandma Dio’s delicious cookies.

Excellent coffee is also a part of the IG experience, which is why we serve La Colombe Coffee. Click here to see our Coffee Menu.

Each offering at Roz and Rocco’s has a signature twist and is not only delicious but also distinctive and addictive! 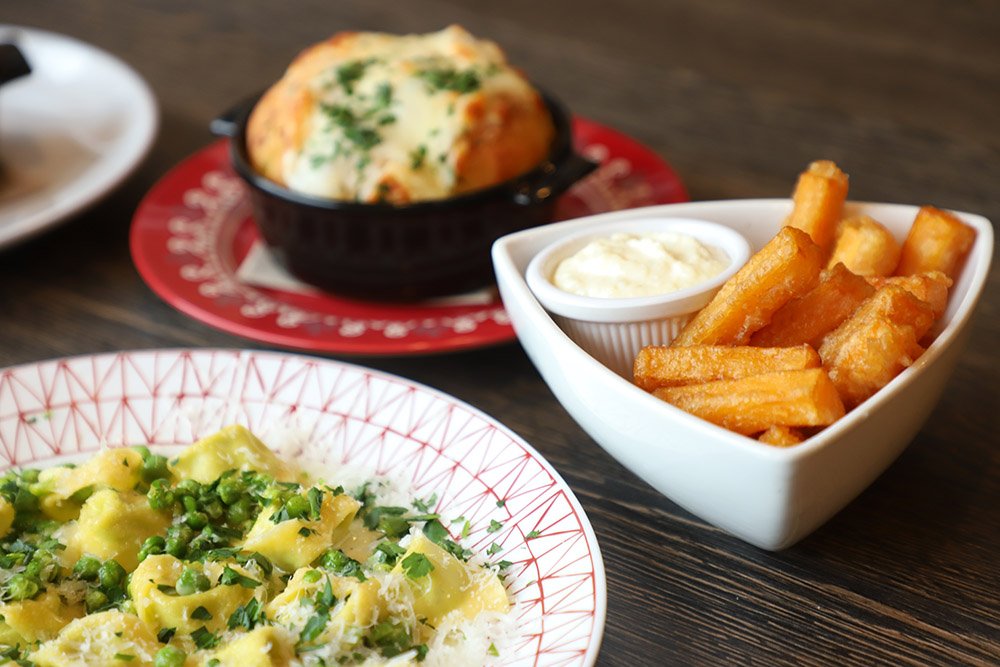 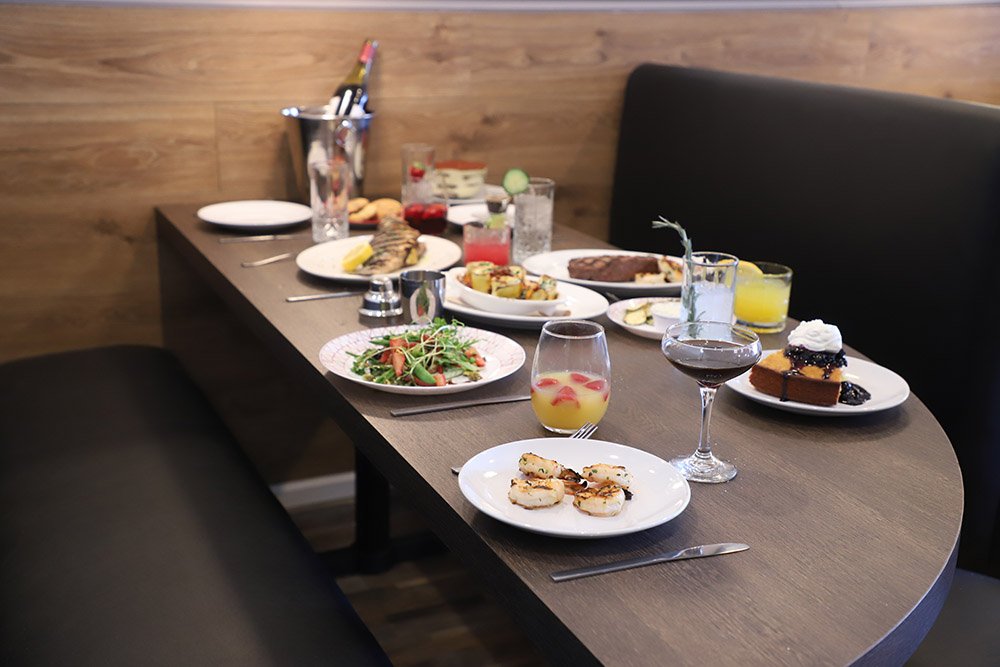 The kitchen of an IG is always “open,” and family and friends are graciously welcomed, even when they arrive unannounced. The same goes for guests who visit multiple times per day or week. Roz and Rocco’s reflects the IG’s kitchen in that we are priced affordably so that you can come back often.

Mix cocktails like you would at home (but with less work): Whether you prefer a classic cocktail or one of our signature cocktail mixers, you bring the liquor, and we do the shaking, icing, and serving for you!

When it comes to beer and wine, we are happy to put your beers on ice. If you prefer wine, you can choose from Scott’s Sommelier selection of wines to purchase at nearby stores or online. Click here to see our Cocktail Menu and Wine Suggestions.

Interested in reserving a table for your next visit?

Order ahead, takeout, “park-thru,” or delivery!

Your feedback is crucial. Be brutally honest!

We’ll occasionally send news, announcements, and specials for our subscribers! 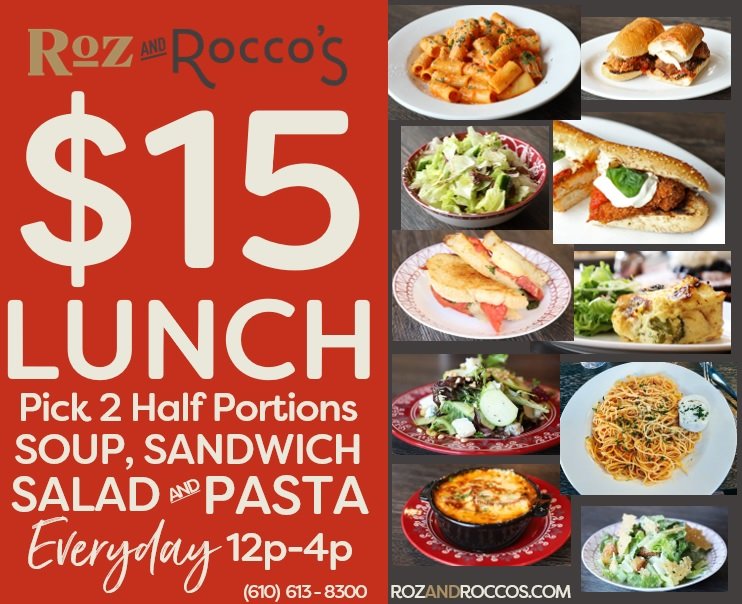